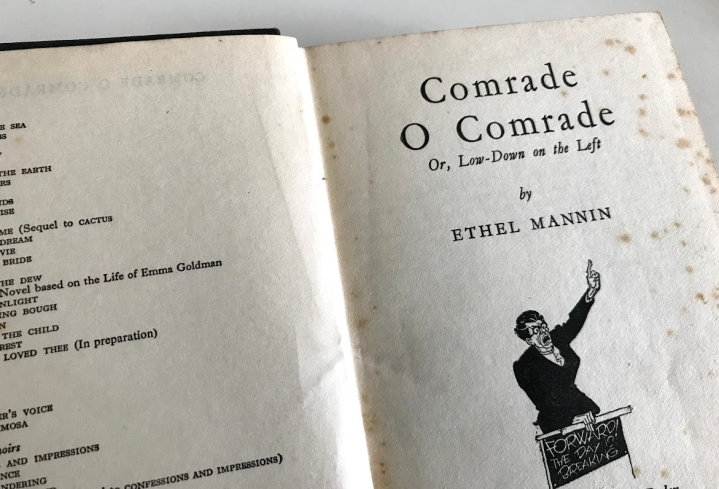 In 1945, as the world emerged from the Second World War, a popular left-wing author with Irish ancestry sat down in a countryside cottage to write a short book with an unusual premise. Ethel Mannin’s Comrade O Comrade, or, Low-Down on the Left was written as a satire of British and Irish radicals during the ‘Popular Front’ period – the years at the end of the thirties when previously divided socialist groups collaborated to build a united front against fascism.

The book is perhaps the most obscure work of Mannin’s prodigious literary output. But with wonderful illustrations by the artist Leonard Boen, and some unique passages (including the only literary account of a branch meeting of the Communist Party of Ireland), Comrade O Comrade is a book worth rediscovering.

Mannin’s device for exploring her world of communists, anarchists and social democrats is the character of Larry Lanaghan: a Galway farmer who becomes the obsession of Peter Isinglass (“Comrade Isinglass to you, Comrade”). Isinglass is a British Communist Party intellectual who spends his days writing articles with titles such as “The Trotsky-Fascist Menace and the Spanish Struggle” for his obscure journal The Muck Sifter. He is a recognisable type for historians of the British left, but he’s on an atypical mission: to transform this humble Irish peasant into a disciplined Bolshevik cadre.

The story opens with our unlikely pair of protagonists amid intense discussion in a Connaught pub that smells of paraffin, rope and dried fish. Comrade Isinglass insists that Larry join him on a journey to get politically educated:

“You owe it to your class. Here in Ireland you have a peasantry which has for centuries lived, as Marx put it, always with ‘one foot in the swamp of pauperism'” Larry smiled, dreamily. “It’s the fine poetic way of putting things you have, Mr. Isinglass.” “Poetry be damned! What I’m trying to teach you is dialectics! Dialectic materialism… The blindly toiling peasantry needs leadership. You, Larry Lanaghan, have it in your power to give that lead. Come to London and meet the enlightened proletariat. Then you will return to Ireland to pass on the torch that Connolly lit!”

Isinglass, we learn, has had the misfortune to have been born into the bourgeoisie, but identifies with the proletariat. Larry, meanwhile, has had the fortune of being born in Galway, a region he has little desire of ever leaving. But when Isinglass reveals that the pair will stop off in Dublin en route to London, Larry hatches a plan. A horse-racing fanatic, Larry believes that he can slip away from the “sassenach with the red-tie and high sounding sentences” to attend the races in Dublin and London. And so, with Isinglass believing he has found the path to Irish peasant revolution, and Larry believing he has found the path to Leopardstown, the pair make their way toward Dublin.

In Dublin, Isinglass leads Larry down an alley to the headquarters of the Communist Party of Ireland on Strand Street. Periodically subject to being besieged by Catholic mobs, the windows of the building are boarded up and someone has chalked a hammer and sickle on the wall. Behind the Party bookstore, the comrades are gathering to discuss the next steps for the Irish revolution. Comrade Barney, a charismatic author and a notorious boozer, is the Party’s leading member and directs the discussion. Isinglass, accustomed to English Party discipline, is shocked by the proceedings. First, he bristles at the “un-Marxian” mention of religion when the treasurer Comrade Coyne proclaims “We ought to be stagin’ a meetin’ in opposition to O’Duffy’s lot, but we need at least fifty punts… God help us!” But Isinglass is even more disturbed when his peasant-revolutionary-in-training Larry suggests a means of swelling Party funds: why not bet the whole lot on a horse?

After the comrades return from Leopardstown, having squandered the entire branch funds on a losing horse called Guinevere, Isinglass and Larry make their way to London. What follows in the book is an at-times hilarious send-up of the various strands of the interwar British left. The London section of the book follows Larry as he attends a series of meetings. “No more meetings” Larry pleads after nine chapters of Communist Party congresses, anarchist gatherings and Independent Labour Party Summer Schools.  “Your political education is incomplete if you don’t know what a meeting out in the suburbs is like”, replies his guide.

Along the way, Larry encounters recognisable historical figures, such as Emma Goldman and C. L. R. James. Mannin, having been a participant in several of the left-wing groups she describes, cleverly dissects the culture of interminable minute-reading sessions and impenetrable phraseology.

The most interesting thread in Mannin’s satire (for me, at least) is how she evokes the lived experience of political activism. Organisational acronyms and Marxist theory fly past Larry, but his personal encounters with sincere revolutionaries and the collective experiences of mass gatherings are what finally convince him of the necessity of progressive struggle. At a gathering of Indian and Black anti-imperialists in Trafalgar square, reminiscent of a gathering I have written about elsewhere, Larry has an epiphany: 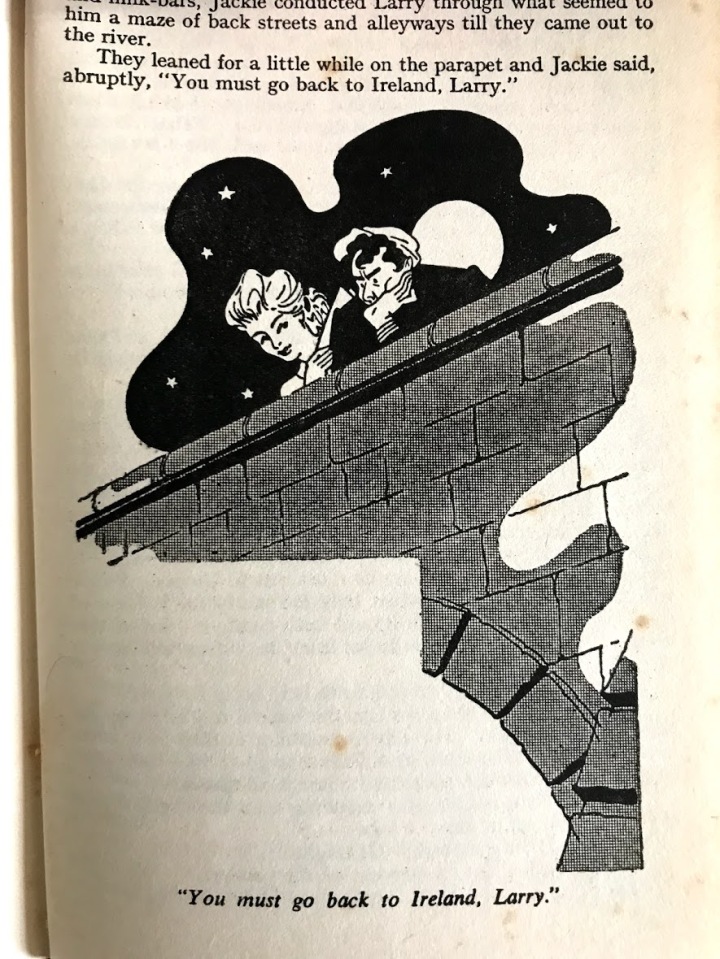 If we write the history of the left as a series of acronyms battling each other, or pen accounts of who attended what meeting and where, then we risk effacing the profoundly important factor of collective experiences in encouraging activist motivations (for more on this, take a dive into my doctoral thesis whenever I get the thing done).

Larry returns to Ireland after his adventures a changed man, though perhaps in spite rather than because of Comrade Peter Isinglass, who abandons Larry as a counter-revolutionary lost cause mid-way through the London section. In the concluding lines, Mannin has Larry reflect that in the end “it’s the poets with their dreams that count; not the politicians with their promises, or the parties with their hates and wrangles. You had to have faith, and you had to have love”.

Comrade O Comrade is a book that often reads like an incisive work of contemporary commentary on the dangers of a divided and fractious progressive movement when facing down the cataclysmic challenge of fascism. Mannin was deeply interested in the question of how to speak of revolutionary change in a way that can win the “non-politically minded” to the cause, writing in 1938: “let us speak of it, taking it quietly, putting aside the prejudice of preconceived ideas, and examining it rationally, in terms of re-creation and new birth, not destruction and taking away, but construction and giving.” Comrade O Comrade, ultimately, is a book about finding yourself, as an individual, among the collective and how to make participation in left-wing movements a meaningful rather than an isolating experience, particularly for outsiders such as the Larry Lanaghans of the world.

II. About the Author and the Reception of Comrade O Comrade

Ethel Mannin (1900-1984), was a participant and chronicler of the British and Irish left, alongside being a popular novelist and travel writer. Her political journey would take her from socialism, through communism and finally to anarchism.

Mannin was consistently interested in the model set by Irish revolutionary women, several of whom she knew personally. In her 1938 book Women and the Revolution, she drew on an Irish example to remind a younger generation that models for militant socialist women were not distant history:

Irish literary figures such as W. B. Yeats, Patricia Lynch, and her husband R. M. Fox, would also count among her acquaintance.

Comrade O Comrade drew heavily on Mannin’s experience embedded in literary circles and the circles of the Left. Mannin was also known for her unorthodox sexual politics, and some sketches of characters in the book reflect this.

Comrade O Comrade would, however, receive a cool reception in The Bell, a leading journal of Irish literary opinion. Margaret Barrington thought Larry “a stupid bore” and saw the other characters as hardly the types capable of leading any Party. While Barrington’s review proceeded from the disputable notion that the members of the British and Irish communist parties were actually capable, she did herself have intimate experience of Irish radicalism. For several years, Barrington was subject to what must have been one of the most frustrating experiences open to someone on the Irish literary left: being married to the communist novelist and notorious womaniser Liam O’Flaherty.  Indeed, Mannin herself would write: “O’Flaherty was something of a legend, for it was said of him that he had only to turn his intensely blue eyes on a woman for her to fall into his arms… I always wanted to meet him, to prove that it was not necessarily so”. O’Flaherty is a likely candidate as a model for Comrade Barney, the literary Irish communist with a penchant for drink depicted in Comrade O Comrade.

Mannin is still read today in certain circles, remembered for her prodigious novelistic writings if not her political contributions. Readers of her work will be rewarded with insights into the radicals cultures of her era and her thoughts on sexuality, politics and the links between the two.

One thought on “Comrade O Comrade: A Forgotten Satire of the British and Irish Left”

For sale: “Big Fella”. Never hung.
Look out for the next issue of @tribuneuk - I’ve got an article on Donegal-born writer and socialist Margaret Barrington, who authored Tribune’s first women’s column in the 1930s. Pretty amazing to be sharing a magazine with the likes of David Harvey, Jeremy Corbyn and rising political stars like Zarah Sultana.
Neil Hamilton Goold Verschoyle (1904-1987). Born into a wealthy Anglo-Irish family, Neil became a communist and republican. He lived in Moscow from 1930-33 and married a Russian woman, Irina Dolrova, with whom he had two children. From 1933, the family were separated by war, internment and the suspicions of Soviet authorities until their reunion in Moscow in 1959. Goold donated part of his inheritance to the Communist Party of Ireland, who used it to purchase their Temple Bar HQ, today known as Connolly Books. Neil’s younger brother Brian was abducted by the NKVD in 1937 and disappeared into the GULAG system.
A 1976 Soviet cartoon depicting Rev Ian Paisley, “ringleader of the Protestant ultras”, blessing weapons to be used against “Catholic workers”.
Ivan Bilibin, St Petersburg born artist with a thing for Russo-Irish women. In 1912, a year after divorcing Maria Chambers, born in St Petersburg to an Irish father, he married Reneé O’Connell, the granddaughter of Daniel O’Connell.
Not really into social media historian beefs but this man should have no credibility in pronouncing upon the “decline of history”. Figures like Ferguson shout about an imagined “overt politicisation” because the real politicisation of history they are engaged in is increasingly covert.
Loading Comments...
Comment
×
%d bloggers like this: