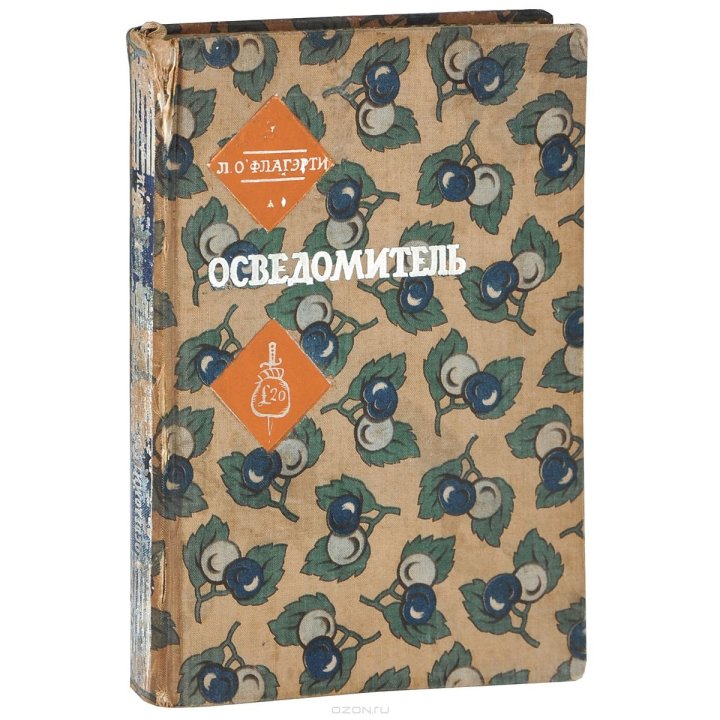 A 1927 Russian-language edition of Liam O’Flaherty’s The Informer.

During the interwar period, Liam O’Flaherty became perhaps the most widely translated contemporary Irish writer in the Soviet Union. In 1927, a Russian-language edition of his novel The Informer was published by the state publishing house based in Moscow. I have translated a review of this book, which includes some interesting Soviet takes on early twentieth-century Irish literature and history. The author based his review on a wide reading of O’Flaherty’s work in addition to private correspondence with the Irish novelist. Notably, the author of the review is a curious (and tragic) figure of Soviet literary history – the young intellectual Sergei Dinamov, who rose quickly through the ranks of the Soviet literary establishment before his untimely death at the hands of an NKVD firing squad in 1939. I Went to Russia, O’Flaherty’s 1931 travelogue of his journey to the USSR, contains a description of the writer’s pre-arranged meeting with an energetic Soviet Europhile. This is likely Dinamov. Following the translation, I have included some further details on Dinamov’s life.

Sergei Dinamov’s review of Liam O’Flaherty’s The Informer, from a 1927 edition of the Soviet literary journal Print and Revolution (Pechat’ i Revolyutsiya):

The aftermath of the world war was marked by economic crisis, the growth of colonial economic independence from the metropoles, the worsening position of the working class and, in particular, the political conditioning of the labouring aristocracy. And yet there was also the ideological activism of the English proletariat. Few writers from working backgrounds were published in the pre-war time, nor did many others move ideologically far from their petit-bourgeois confines or introduce new proletarian motifs. A novel by the painter Robert Tressel, ‘The Ragged Trousered Philanthropists’ was the literary event of 1914 and the sole exception. Yet in the post-war period, a whole galaxy of proletarian writers could be noted amongst English literature, whose productions were very significant (The miners James Welsh, E. Boden, Roderick Dotaller and Harold Wilson, the metallurgical workers Richard Fox and Stacy Hyde and the blacksmith Roland Kenny).

The features of politics and the economic situation of Ireland was reflected in the work of Irish proletarian writers – in their creations the notes of social class and revolutionary nationalism sounded more acute, at least more than for their English comrades – they reflected the proletariat, a thematic fixation with the peasantry and the intermediate social layer. Royal England did everything to defeat the proletarian literature of Ireland and deprive contemporary Ireland of literary revolutionaries and radical poets, who stood in doubtless opposition to their political repression (It is sufficient to point to the prominent radical poets P. Pearse, T. MacDonagh and J. Plunkett who in 1916 were sentenced by a military court to be executed). Ireland’s contemporary proletarian letters began with the book Children of the Dead End by Patrick McGill, labourer and sailor.

After the Irish uprising of 1916, there appeared plays by a participant in this uprising, the construction worker Sean O’Casey (Juno and the Paycock, the Plough and the Stars), with all of the tremendous force of the bloody Easter Week. Then, in September 1922, Liam O’Flaherty published his first novel The Neighbour’s Wife, the appearance of which gave English critics a reason to place O’Flaherty amongst the talented writers (‘One can already assert that O’Flaherty is going to be listed as one of the new masters of letters’ – G. Gould, The English Novel of To-Day, p. 196). My long written communication with O’Flaherty allows me to make some observations regarding the identity of this prominent Irish writer. He was born in 1896 in Ireland’s poverty-stricken west. During his childhood years, he was already becoming influenced by revolutionary nationalism and later started to participate in the workers’ movement. In March 1917, he became a communist while on the front and from 1920-21 fought against English troops in Dublin. He travelled halfway around the world as a sailor, engine stoker, loader and docker before eventually settling on a farm in Ireland. Detesting capitalist society, he expressed sincere sympathy with our revolution, while at the same time internally contested. He left the Party and the workers’ movement, perceiving it in a Dostoevsky-like manner (dostovevschchinu) – “I do not know whether I am Alyosha or Ivan Karamazov”. O’Flaherty could not accept the revolution of the humdrum while the Irish rebellion was suppressed.

The O’Flaherty oeuvre flows in two directions. Firstly, he addresses the natural world (which, by the way, is in abundance on his farm), expressively tracing the mentalities of animals, looking at the features of pure instinctual feeling – maternal love (Death of the Cow, Wild Goat), rivalry (Two Dogs, Envious Chickens), etc. Secondly, in humans, O’Flaherty is attracted to precisely those qualities which have animalistic origins, primitiveness, vindictiveness, cruelty and loathing. In the novel Neighbour’s Wife, he takes as his protagonist Father McMahon, in a period of his life when a steady stream of events detonates in a surprising emotional outburst, as whisky stands to affect the pastor’s most steadfast ethical principles. In the following novel, Mister Gilhooley, in a few lyrical pages dedicated to his lover, one is lead through dark events while the main characters disappear into mental ruin. O’Flaherty’s short fiction about Ireland is a gallery of individuals who, crushed by life, are cast aside from their society and find themselves in the criminal underworld (Blackmail, The Tent, The Terrorist, Poor People). The Informer was written in 1925. This novel about Irish revolutionaries and communists is highly characteristic of O’Flaherty. He moves passed the workers’ movement, he does not turn his attention to the heroic moment, he does not give one positive depiction of a revolutionary, he took a revolution in a moment of defeat, decline and, widespread disappointment as his subject. His main characters are revolutionaries, despairing and terrorised, they are severe and mysterious conspirators. “‘I believe in nothing’ confessed Strack, the leader of the communists, ‘the most reliable tool’”. He is a confused intelligent*, flinging himself into extreme measures to save himself from himself. “No more do I want to know about the Сentral Committee, nor the revolutionary organisations. They can disappear into their oblivion” states one friend of the “revolutionary”. He is echoed by Gypo: “Workers are not worth the fight.” Taking only one series of events, O’Flaherty gives us the Irish rebellion in a certain perspective, although he was a participant. Despite this, the experienced Russian reader should be obliged to read The Informer.

The translation is carried out satisfactorily, but the verb “To be” (Быть) is used repeatedly. A fault which, incidentally, most translations from English suffer. One cannot fail to agree with the deletion of two pages at the end of the book – their saccharine sentimentality is contrary to the ordinary character of the novel. – S. Dinamov.

*From the Russian Интеллигент, a member of the intelligentsia.

Sergei Sergeivich Dinamov, born in Moscow in 1901, was a Soviet literary critic, Shakespearean scholar and the editor of several prominent Soviet journals. Despite his youth, Dinamov rose to a prominent position in the Soviet literary world, becoming director of the Institute of Red Professors in the mid-1930s. He regularly corresponded with Western authors and worked on translations. In 1927, as editor of the Anglo-American Section of the Moscow-based State Publishing House (Gosizdat), Dinamov assisted in bringing O’Flaherty’s work to Soviet audiences. In April 1939, at the height of the Stalinist terror, Dinamov was arrested and charged with membership of a counter-revolutionary organisation and terrorism. One month later he was shot and buried in an NKVD facility outside of Moscow. In 1956, following Khrushchev’s “secret speech” and denunciation of Stalinist excesses, Dinamov was posthumously cleared of all charges and rehabilitated.